This may be a bug: When I had an issue with the speed of the spring animation on a page I created another test page with two elements. My problem was that at the default 500 slow down rate it was just a little too fast so I tried both a lower and a higher # slow down rate and they both were much faster than the original 500.

That is when I decided to test two elements on a test page. Both of the test elements started with the spring action at default 500. One I kept at the original default 500 as the slow down rate and the other I tried speeding up and slowing down, no matter what number beyond 500 [20 or 4000] the spring action sped up. Then I change the element that I was testing the speeds back to 500 and while it shows 500, same as the untouched element, it is moving at the accelerated speed. When viewing both of the test elements in Interact mode, both set at 500, the one that never had the slow down rate change moved at its original speed and the one that had been changed and then changed back to 500 is moving very fast. 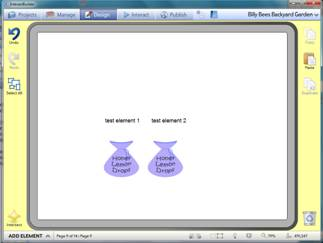 Hi Ann, try downloading the lates IB3 version from the site and test it again. I made a sample book and the Spring Behavior is working.

Ann, if you are still having a problem with the spring behavior could you please upload the sample app that you made (zip up the app folder which should be in your documents/interactbuilder folder).

I found the spring behavior works fine for me while in interact mode but when I share the app,

It does not work on the ipad.

I put the file in the dropbox and sent you a link.  I made a test pg not a text app (next time I will do it on a separate app when I do a test)  the test pg is pg 9.  Thanks for helping.

0
Answer
Not a bug
Ezra Weinstein (Administrator) 7 years ago